[The following is the third excerpt from TACTICAL RESPONSE: Art in an Age of Terror (2014).] 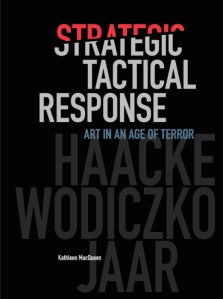 …In conversation, Hans Haacke suggested that the division he saw as a wound in 2005 was healing through the [2008] candidacy of Barack Obama. In the first 100 days of the Obama presidency, however, the divisions created by the actions of the Bush administration were regaining the spotlights of blogs and the headlines of print and television media. At the time of the 2005 State of the Union address, one of the principal conflicts in public opinion was the degree to which accepted ethical standards of conduct could be adjusted in the name of national security. Three months into a new presidency, the Administration and Congress debated the threat full policy disclosure might pose to national security. At both junctures, torture was the subject of the debate.

Haacke’s [2005] exhibition as a whole speaks of democracy, division, and the nature of symbolic language, while its details expose just what it is that has undermined the integrity of our democratic institutions – the infringement on civil rights, including free speech, habeus corpus, transparency, and the willingness to uphold international codes of ethics in regard to torture. Star Gazing (2004) literalizes the metaphor “seeing stars” (often invoked in the inadequate description of pain): Haacke’s mesmerizing “starry sky” – a figure blinded by a hood of stars – winces under threat of torture. As the artist suggests, “Everybody who saw the images coming out of Abu Ghraib understands that my arranged photograph alludes to those ‘facts on the ground’.”[**]

In discussing torture in her book The Body in Pain (1985), Elaine Scarry details the close correlation of pain to language, particularly in the signification of the tools and emblems of torture but also in the relationship between pain and interrogation. Pain is used to control the language of the victim thereby gaining agency over that individual’s extension into the world (their ability to create a relationship to and within the external world). Torture therefore, according to Scarry, deconstructs an individual’s worldview by destroying the building blocks of sentience (vision, hearing, touch, smell, taste) and symbolically shredding what is civilized through the localized example of a body, or set of specific bodies. Torture always displaces the responsibility onto the victim, not only destroying the physical body (individual) but also the social body (worldview) and the juridical body (legitimacy). Scarry explains this link between the physical and the verbal:

Torture consists of a primary physical act, the infliction of pain, and a primary verbal act, the interrogation… The connection between the physical act and the verbal act, between body and voice, is often misstated or misunderstood. Although the information sought in an interrogation is almost never credited with being a just motive for torture, it is repeatedly credited with being the motive for torture.[***]

The Bush administration failed to understand history: it credited national security as a just motive for information and information as a just motive for torture. They paraded information – known in the field as “intelligence” – but they sought legitimization. Haacke identifies trauma as both the cause and the condition of the division within our nation-state: we have a flag that has wrapped itself around the notion of torture, hiding its effect and masking its intent. For the intelligence gained from torture is a negative sentience – a display of authority and power – an actuality of little worth, which hides its true ideological purpose of breaking the resolve of the opponent and substantiating the legitimacy of power’s rationale. So Haacke presents us with division – two sides bearing the same standard, two sides in which opposition resembles its foe. Then he introduces an endless stream of information as an infiltration of alternative information networks of news and ideas into the aesthetic space of the gallery. News (1969/2005) is representative of Haacke’s defiance of the spaces of exhibition as enclaves with boundaries, forging instead a connection between the outside world and the inner sanctum of art spaces. This is another kind of intelligence…