All that is marvelous: Haacke’s Gift Horse

One could easily believe Hans Haacke’s current exhibition at the Paula Cooper Gallery is about the cooptation of art for purposes of public relations and the influence of money in support of ultra-conservative agendas – and it is! – particularly with the artist’s penchant to time his exhibitions during election season (e.g., State of the Union, 2005); but, more basic to all this, he shows us H2O as the basis and the link for life on earth. Water, water everywhere…life, yet also death. We are poor stewards – Haacke reminds us – if we fail to connect the accumulation of wealth and power to its resulting impact on the environment. And we are inadequate to the task of culture if we turn a blind eye to the mechanisms by which art becomes not only the backdrop but also a legitimizing tool for destructive economic policies.

The exhibition is comprised of three principal works: Gift Horse (2013), Haacke’s winning proposal for the Fourth Plinth on London’s Trafalgar Square, Together (2013), a re-creation of the 1969 Circulation, and The Business Behind Art Knows the Art of the Koch Brothers (2014) – each one a complicated discussion on its own.[1] All three are linked by a series of photographs that connect the dots in the kind of visual continuity that nature provides (for how long?). Tree roots in Growing Up Together uncannily mirror the pathway of tubing through which water circulates in Together. Concentric circles caused by a disturbance in a body of water expand outwards in From Here to There. A lone bird soars high over the blue silhouette of a shadowed landscape in Checking (all from 2014). Figurative language for complex analysis. Through his photographs, Haacke proposes that we shape our worldview through the senses and that sentience carries with it responsibility. 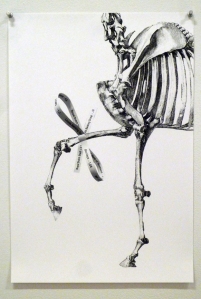 Though Haacke’s means of production is flexible his methodology consistently juxtaposes parts to the whole, which is a premise of systems analysis. In a 1971 interview with Jeanne Siegel, Haacke defined a system as “a grouping of elements subject to a common plan and purpose [that] interact so as to arrive at a joint goal.”[2] We think of systems analysis as having its birth with the Macy conferences, during the 1940s and 50s, based on the theories of Ludwig von Bertalanffy who classified biological organisms not by appearance (as did Darwin) but by organizational properties.[3] Even earlier, however, Freud at the turn-of-the-twentieth-century, thought through the biological mechanisms of cells to formulate his understanding of the life and death instincts in human psychology.[4] According to Freud, instincts – like nature itself – must be in balance for life to flourish; otherwise, life’s forces fall to the horse of the apocalypse and, for Haacke, this is a skeleton of a gift we have failed to question!

[“All That Is Marvelous” represents a turn in Shifting Connections – weekly shorts of 100-500 words on books, exhibitions, and artworks that radiate Eros even as they face the darkest Thanatos of contemporary systems. For more detail see the About page.]