Jane Alexander, Bom Boys (1998) installation view in the St. Ambrose Chapel of the Cathedral of St. John the Divine.
Collection of the artist. Photograph © 2013 Kathleen MacQueen.

On any given day, hundreds and if not thousands of visitors climb the steps to enter the nave of the Cathedral of St. John the Divine. Ubiquitous tourists, committed parishioners, and devoted worshippers wander, gawk, and pray oftentimes settling in a favorite chapel for solitary meditation or collective communion. Among the worshippers this summer, a strange flock descends like figures of the Antichrist poised to engender fear while others like fallen angels plead for forgiveness through glistening eyes and outstretched hands.

This bestiary harkens back to the era of Chaucer or early reports from the colonies describing fantastic creatures – part human, part beast – ignorant souls wanting guidance or malevolent mutants capable of the worst atrocities. Yet, they also are the stuff (used not as lazy slang but in the sense of substance, materialization, or concrete realization) of contemporary imagination – a child’s assortment of wild things, Boogiemen, or Panga (machete) men – that in nightmares elicits the confusion of angry consternation but when worked into figures or tales evokes tender compassion. 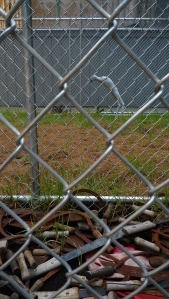 They are in actuality the stuff of memory and imagination of the South African artist Jane Alexander manifesting the entire contents of its dictionary definition: paraphernalia, junk, mess, gear, material, substance, matter, things, objects, articles, packages, bits and pieces. Through carefully crafted life-like figures with a curious array of found clothing and accoutrements, she creates a repertoire of characters who carry, like refugees, the remnants of their origins but wear as scars, as many of us do, the burdens of our decisions. Curator Pep Subirós has so sensitively populated the chapels and niches of the cathedral with this menagerie that in the end they seem to be strange pilgrims, both aggressor and wounded, purposely present, silently beseeching forgiveness.

Jane Alexander grew up in a white community in racially divided Johannesburg and came of artistic age in the last violent years of Apartheid. It was a time when the cruel images of the Bang Bang Club (a camaraderie of hardened photojournalists), the vivid exposures of David Goldblatt, and the resistance testimony from Soweto were receiving international attention. Overtly political expressions of the struggles of apartheid gained the highest accolades. How to be both honest and true to one’s experience and abilities and yet remain relevant was a challenge Alexander met in a triad of humanoid figures both exquisite in masculine physique and horrific in deformed features. These Butcher Boys (1985-86) sat complacently on a bench, their ears, nose, and mouth fused into useless tissue, their eyes perverse beacons of surveillance, and their misshapen horns evocative of a vain virility.

Jane Alexander, Infantry (2008-10) fiberglass sculptures, oil paint, found shoes, installation view in the Chapel of St. Boniface with the Archangel Michael in the Cathedral of St. John the Divine.
Collection of the artist. Photograph © 2013 Kathleen MacQueen.

From the beginning Alexander used analogy, metaphor, and allegory to speak the contorted relations of prejudice, the distorted formation of stereotypes, and the severe consequences of the exercise of brutality and constant surveillance fostered by apartheid practices. The tools of farming (and colonizing) surfaced as weapons of inhuman crimes as she turned the frightening tales of black Pangamen of her childhood into archetypal inquisitions of the source of actual (rather than projected) terror. The artist’s disavowal of a direct political critique was criticized and yet she gained recognition thru major international exhibitions, including the 1995 Venice and the 1994 and 2000 Havana Biennials. Time has favored these works; through installations that avoid the sterile white walls of museum space in favor of the historical context of social space, the characters of her fables gain nuance and resonance. Silent sentinels of the shadows, mutations of injustice, these perpetrators and victims of cruelty have, as Heidegger might say, been thrown into the world, abandoned and delivered over to themselves.[1] They are paralyzed, unable to go forth, arrested in a pose of supplication until someone heeds their circumstances, takes notice, and relieves the suffering.